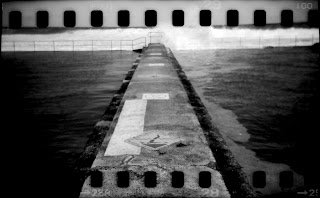 1. Tim Winton writes a lot about the sea. To him, it is a place where you can forget your troubles, dive into it and become small, in its vastness. How is the sea a key character in BREATH? What does the sea mean to you? How does it resonate for you and in the novel?
2. This book looks closely at male adolescence, the need to push themselves, to feel what it is like to be mortal. Do you think Winton captures this drive? Do females have the same drives in adolescence? Would the book work with a female protagonist?
3. I read an interesting article in the Spectrum last week about Pain. It outlined; "...pain avoidance can seem the primary goal of existence. But it's also true that pain - the idea of pain- excites and attracts us, and not just in boutique activities such as extreme sports or S&M sex. Violent movies energise us, partly by imagined pain" (Elizabeth Farrelly).
How does this concept work in BREATH?
4. Tim Winton likens surfing to a dance, a thing of beauty, the one thing he is proud for his daughters to see him doing. Is this talent, the one thing Bruce Pike can take out of his relationship with Sando and Loonie? Do you gain insight into the world of surfing by reading this book?
5.  The book has sparse language. Short, sharp sentences, with the dialogue mixed into the narrative. What effect does this give the novel?
6. How do the start and end bookend the action of the novel? Do you think this works? I have heard many people feel the end is unsatisfactory in the novel. What do you think of the end? Could you think of an alternative end?
7. There are various triangles involved in the relationships within the novel. How does the entry of Sando throw the relationship of Loonie and Pike, Eva with Sando and Pike, Loonie and Pike. Do you agree that a third person will test a relationship, and either change it for the better or break the bond?
8. Flirting with death in youth, when you don't understand its consequences is a scary thing. Do we just do this in the first world because we are so removed from death? How do we as parents think we can steer our children through this?
9. Tim Winton, in his interview on Radio National, outlines that he does not write individual books, they are part of a tapestry and he is always adding to a world. If you have read other Winton books, how would you describe this world and how does BREATH add to his canon?
10. Tim captures the musicality of the Australian language in his books, he celebrates it rather than tries to hide it.
Well he got waves, said Loonie dully.
Yeah, he made two. He did good.
Loonie stood there and took it in.
I shat myself, I said. I took the worst floggin. I freaked.
How is this book uniquely Australian? Do you think it would work for  an overseas audience?
11. What is the role of Eva? How does she oppress and liberate the story? How responsible is she for Pike's lonely adulthood?
12. Who is the biggest victim in the novel? Who do you relate to most?
13. How much do you believe in destiny? How does Winton keep the threat bubbling underneath BREATH? How much do you believe the characters got what they deserved?
14. What do you think of the idea of living intensely vs living simply? What is your philosophy?
15. When the novel changes gear from the extreme sport to the extreme sex does the tragedy of these characters become intensified? How much are these characters just trying to do anything they can to feel alive?
16. Is BREATH a good title for the novel. How does Winton layer the metaphor of breathing in the novel?
17. Fear is a big issue in BREATH. How are these characters addicted to fear?
Posted by Teresa Bell at 10:54 PM