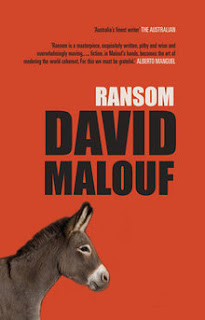 1. Malouf is one of Australia's leading poets - in what way can you see the mark of the poet in Ransom? How does this pay heed to Ransom's ancient sources?
2. Malouf in his Afterword connects the ancient war of Troy to the war in Australia in 1943 and he started writing it just after 9/11. In what ways is Ransom an anti-war novel? Why is it that war stories seem to historically be the things that are lyrically chronicled and passed down?
3. How is Malouf's take on the battle of Troy different from Homer's?
4. Ransom is very much a book about storytelling. Why are stories told? Why do we need to hear them?
5. In what way is the title significant?
6. Ransom does still glorify elements of war, Achilles talks about the "Warrior spirit" that needs action. Do you think this is a biological part of us? What other elements of the code of war does Ransom chronicle in a positive way?
7. How does the structure mirror classical storytelling? In what ways does the violation of Hector's body lead the way the events unfold in Ransom? How does the classical Aristotilean tradition of tragedy play out?
8. Many characters in RANSOM take on other identities, names, costumes yet Malouf manages to uncover the wonder of simple relationships. What do you think he is saying about titles, costume, class, identity?
9. Women, children and men are clearly separated in the book. They all have their place. What sort of world is it for women? Men? In what way do the women have the power?
10. Loss of a loved one is something common to nearly all the leading characters. How does this loss unite them, divide them? How do they each try to assuage their grief? Do they succeed? Can they succeed?
11. Hecuba cries "I carries him...here, here...it is my flesh that is being tumbled on the stones out there. Seven times now I've grieved for a son lost in the war. And what I remember of each one is how they kicked and their little heels under my heart...here, just here." I think this is one of the most powerful speeches in the book. How does this and Somax's loss affect Priam? Why is he uncomfortable by this talk? Are women more connected with the loss of a child?
12. Priam starts to enjoy his adventure to collect his son's body, to appreciate the "human occassions" to take part in the "unneccesary and particular". What do you take away from this book about the importance of staying alive to the small pleasures? How is it that Priam has been sheltered from this? There is a tradition in literature of experiencing being poor - Down and Out in london and Paris, Prince and the Pauper, Henry IVth - can we ever really appreciate poverty without living it? How in our wealthy western world can we understand and learn from other cultures with so much less than us but often so much more?
13. Like in most classical texts, Gods can appear at random moments and walk among humans, they are inconsistent and can play games? Why does Hermes appear? How else do the Gods make themselves known in RANSOM?
14. There is an acceptance of fate and the timing of death in RANSOM, the God's often speak to them about it. That death is the bargain we have in living.  Malouf writes "it is the coldness of that distant star that is the body's isolation in death." and Achilles sees his death, his son's death and death upon death - what does this image create for you?
15. I was struck by the quiet beauty, the contemplation of this book, the peace within war. I am unsure we can ever go back to that quiet contemplation of the stars, the innocence of space and time with all our new communication tools. Have we lost the ability to sit with nature with these new inventions of television, phones, internet - can we have a journey such as Priam's?
16. In what ways is Priam changed? Achilles? Saxon? How is this story one about male friendship? Does it differ from female friendship?
17. I found the novel difficult to get into, nearly gave up countless times? Did you find the book challenging? What doesn't work for you? How do you rate it?
18. The book talks a lot about soul connections - between friends, spirits being unrested, souls unsettled. Are we always going to be a  world full of unsettled souls? How does this small details of nature outlined in the book ground us in a bigger world?
19. Malouf has chosen to put a mule on the cover. Why? Saxon seeks not to revenge himself by killing Beauty. What does the book say about revenge? What is the symbolism in the mules names? How is RANSOM a modern parable for our times?
20. To me the most profound part of the book was the realisation that Priam has that he had been saved by not loving in the way Saxon had, but saved in a way that had meant he did not feel or know what it was to feel - "violent intimacy" or the "pain and pleasure mixed." Is this the beauty of life itself and our need to accept it and play it out our challenge like Priam's?
21. “In a lot of my fiction, people are haunted by an alternate life they might have lived. Life has a shadow as well as a substance." - David Malouf. What does Malouf mean by “life has a shadow as well as a substance”? How are the characters respond to this revelation?

22. The critics were largely in rapture over this novel. See below. Do you agree with these reviews? Is it one of the best novels of the last 50 years of Australian writing?

“Lyrical, immediate and heartbreaking Malouf's fable engraves the epic themes of the Trojan war onto a perfect miniature - themes of war and heroics, hubris and humanity, chance and fate, the bonds between soldiers, fathers and sons, all newly burnished and brilliantly recast for our times.”

'I thought I'd just dip back into Ransom and read a couple of pages. I didn't get out of there again. The way he caresses you, he just he caresses you and surprises you. It's still one of the great moments in writing in this country in the last 50 years. There's a moment in Ransom, where you just sit up and go, 'God! I can't.' I love surprise. I love surprise. And it has one of the great surprises in it.' - David Marr, First Tuesday Book Club

The themes of this apparently simple, yet immensely moving, modern novel are still vast: loss, forgiveness, love and redemption. Lyrical, witty, gentle, this is above all a story of transformation.' Elisabeth Speller, The Independent

'... lithe, graceful and deeply moving tale ... These pages of Ransom are nothing short of magical. Malouf’s prose is delicate, marvellously alert to the natural world and endowed with a quality that has one name only: wisdom. There is something Shakespearean about this section: not the Shakespeare of the great speeches but those quiet moments …when time stands still and the nature of life is mysteriously disclosed.'
Andrew Riemer, The Sydney Morning Herald
Posted by Teresa Bell at 3:48 PM