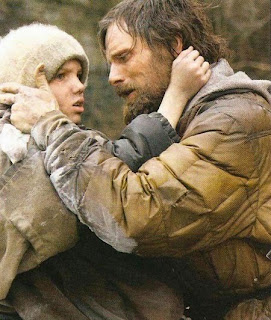 DO NOT READ UNTIL YOU HAVE FINISHED THE ROAD

PLEASE NOTE THESE ARE JUST AS A GUIDE FOR DISCUSSION, IT IS FREE FORM AROUND THE FIRE FOR THURSDAY - DRESS WARM!!

ABOUT THIS BOOK
Set in the smoking ashes of a postapocalyptic America, Cormac McCarthy'sThe Road tells the story of a man and his son's journey toward the sea and an uncertain salvation. The world they pass through is a ghastly vision of scorched countryside and blasted cities "held by cores of blackened looters who tunneled among the ruins and crawled from the rubble white of tooth and eye carrying charred and anonymous tins of food in nylon nets like shoppers in the commissaries of hell" [p. 181]. It is a starved world, all plant and animal life dead or dying, some of the few human survivors even eating each other alive.

The father and son move through the ruins searching for food and shelter, trying to keep safe from murderous, roving bands. They have only a pistol to defend themselves, the clothes they are wearing, a cart of scavenged food--and each other.

Awesome in the totality of its vision, The Road is an unflinching meditation on the worst and the best that we are capable of: ultimate destructiveness, desperate tenacity, and the tenderness that keeps two people alive in the face of total devastation.


Unless otherwise stated, this discussion guide is reprinted with the permission of Vintage. Any page references refer to a USA edition of the book, usually the trade paperback version, and may vary in other editions.