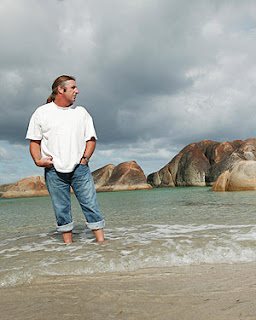 Tim Winton began his first novel, An Open Swimmer (1982), at the age of 19, while on a Creative Writing course at Curtin University, Perth. It won the Australian/Vogel National Literary Award, and he has since made his living as a full-time writer.

Born in Perth, Western Australia, in 1960, he is the author of several novels for adults, including Shallows (1986), a novel set in a whaling town, and Cloudstreet (1991), the tale of two working-class families rebuilding their lives, both won prestigious Miles Franklin Awards in Australia. A theatrical adaptation of Cloudstreet toured Australia, Europe and the USA to universal acclaim. His novel That Eye, the Sky (1986) was adapted for theatre by Justin Monjo and Richard Roxburgh, and also made into a film. A second film adaptation was made of In the Winter Dark (1988), featuring Brenda Blethyn. The Riders (1995) was shortlisted for the 1995 Booker Prize for Fiction, and also won a Commonwealth Writers Prize. Many of his books are set in his familiar landscapes of Western Australia.

After writing six of his adult novels, Tim Winton wrote his first book for children, Jesse(1988). Other children's books followed, including a series of three slapstick coming of age books (1992-1998), about the 13-year-old character, Lockie Leonard. These are being made into a series for television. The first such book, Lockie Leonard, Human Torpedo (1992), won the Western Australia Premier's Award for Children's Fiction. It was adapted for the stage by Paige Gibbs and toured nationally with great success.

He is also the author of two collections of short stories, Scission and Other Stories (1987) and Minimum of Two (1987), and co-author of several travel books about Australia, including Land's Edge (1993).

His books include Dirt Music (2001), winner of several awards and shortlisted for the 2002 Man Booker Prize for Fiction, and The Turning (2005), which tells 17 overlapping stories. His most recent novel is Breath (2008), winner of the 2009 Miles Franklin Award.